Defense Heroes MOD APK is a classic tower defense game with standard gameplay. You will once again be immersed in dramatic and fierce battles, the game was released by Zala Games.

Defense Heroes MOD APK revolves around heroes who are fighting day and night to protect the world from evil. After the war, they returned from the battlefield and longed for a life of peace. But it seems that all those good things were broken as soon as the gates of hell opened, bringing with them the dead corpses and demons. They attack the kingdom with the aim of destroying all human life. 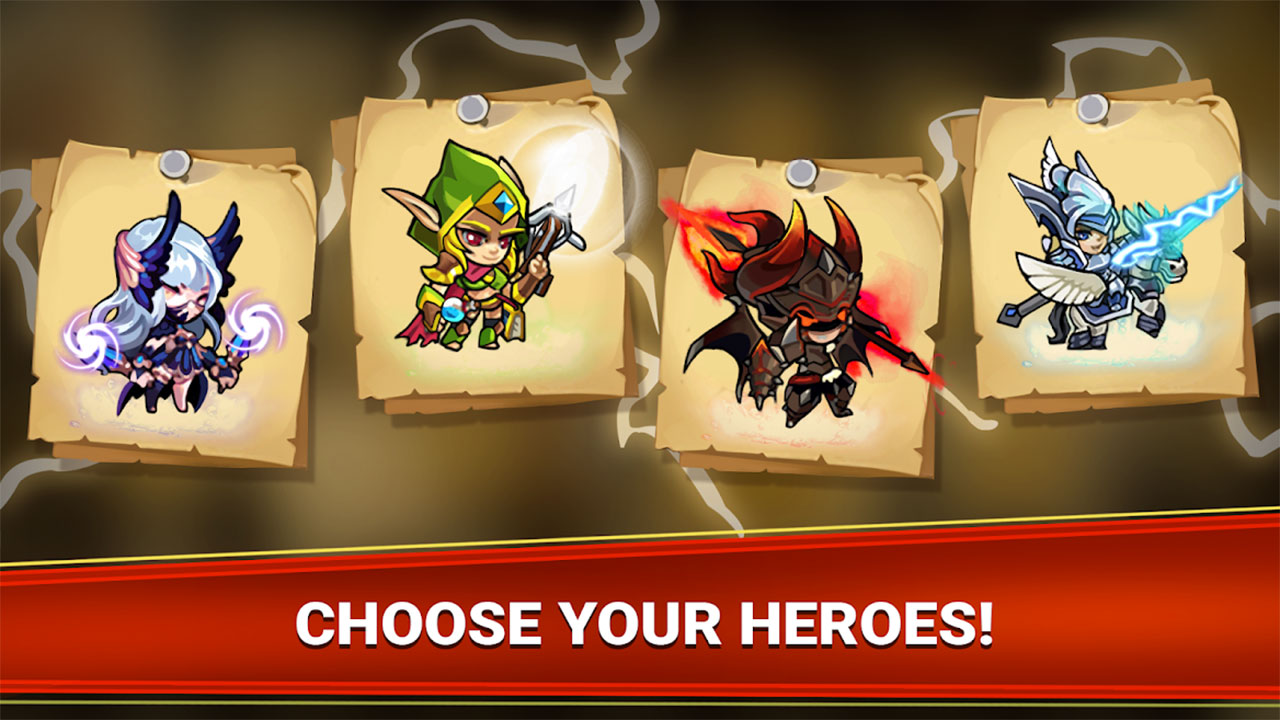 Saint Swordsman led his army one step behind. He realized this when he saw the devastating scene on the battlefield, full of blood and corpses. He knew his mission was to lead the remaining warriors to fight to protect the innocent from death. However, the enemies he and his teammates are about to face are not only the undead, but they are also demons from hell with powerful magic.

Will this last war bring possible results under the leadership of Saint Swordsman? Please follow him to find the answer!

Defense Heroes MOD APK is a typical tower defense game. Your throughout task in the game is to summon heroes along the road leading to the castle and not let the enemies cross your defenses.

To do this, you just need to tap on a location on the screen to gather and build troops. Then click on the skull icon in the left corner of the screen to start the fight. 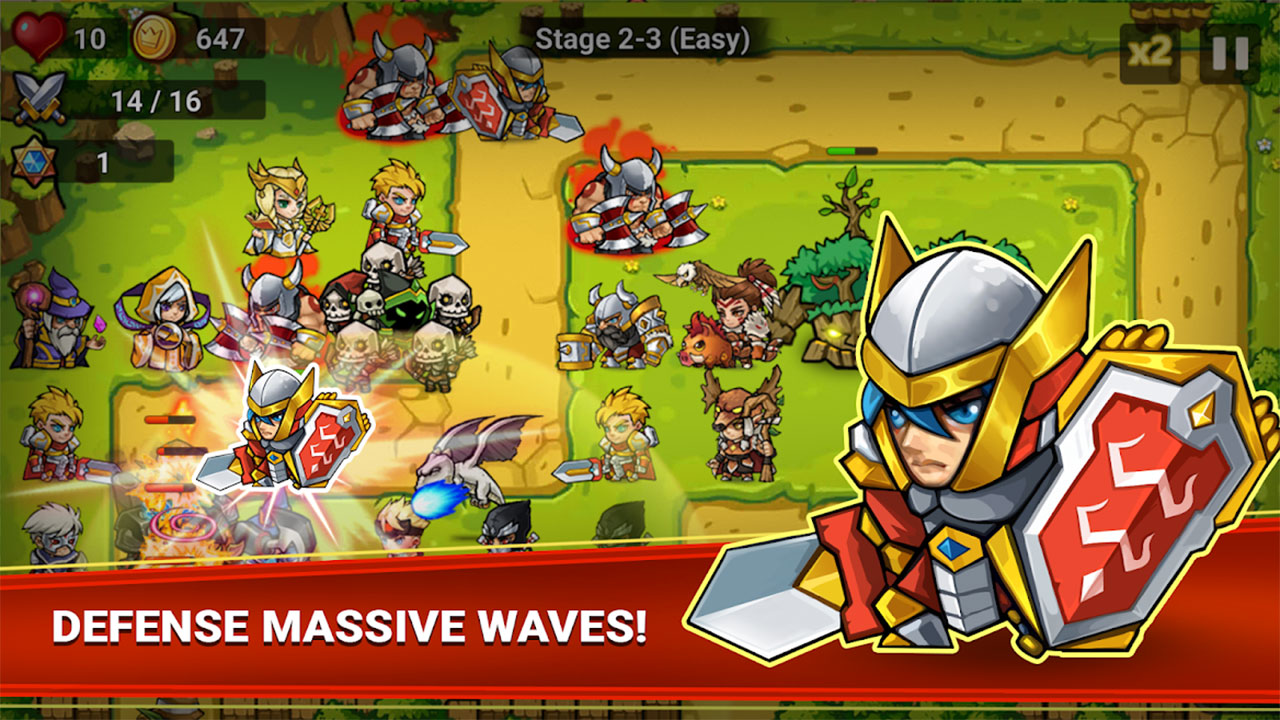 Usually, each fight has 4 to 5 rounds. Corresponding to each round, you have to fight a wave of enemies. When their force is completely defeated, you should immediately prepare your force for the next wave. If it is possible to win all rounds, you will pass the level, receiving rewards from the system.

The difficulty and complexity will gradually increase as you arrive at new locations. Sometimes, you will have to deal with enemies that are invisible or have a large body. If they are invisible, the heroes cannot attack or damage them. And then, the hero’s special skills will take effect. Lighter has the ability to illuminate invisible enemies. Knights have the ability to power up the entire squad to be able to defeat enormous enemies. Meanwhile, mages can freeze enemies, causing them to slow down.

Besides, heroes can develop stats including attack, defense, and time of special abilities. You can equip them with weapons, costumes, or awaken them. 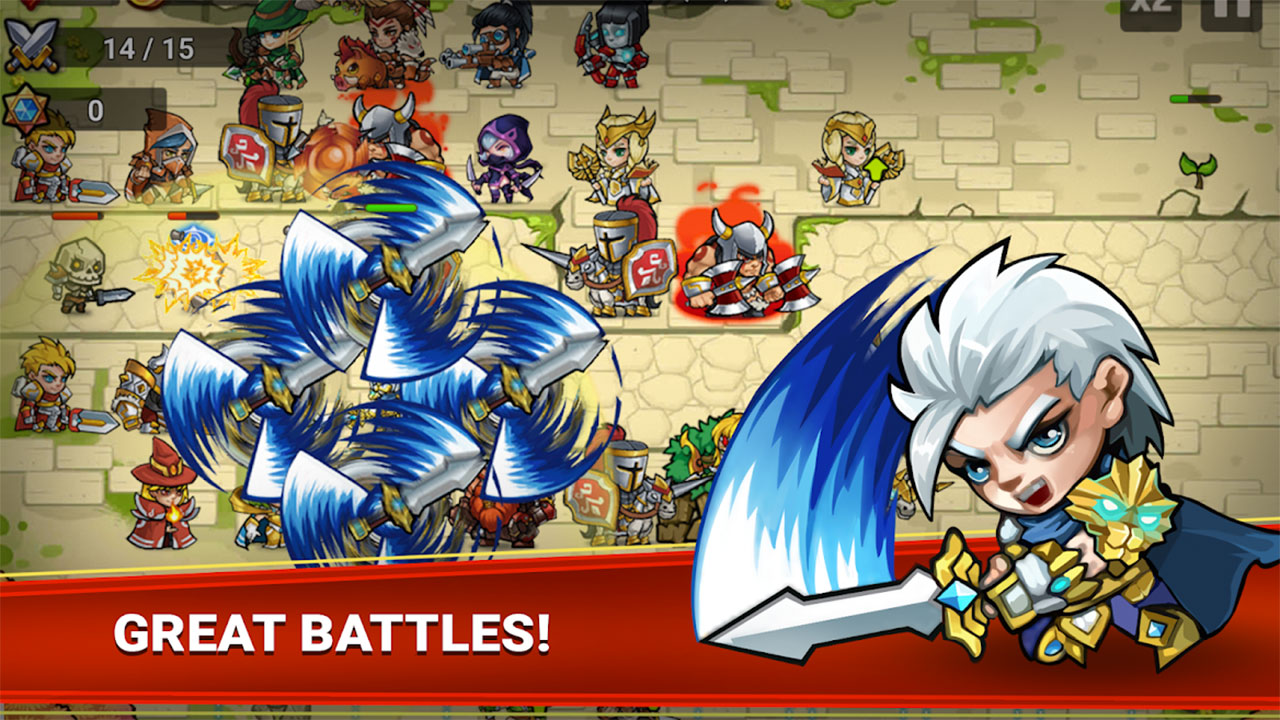 Defense Heroes MOD APK is considered a quite flexible game. It allows you to take action while the fight is going on. You can use support items, summon more heroes, and upgrade them during the fight. Although the process costs a lot of coins, you can earn them by winning or gaining special achievements.

Justin ebel: Leveling up your heros is a little slow but otherwise it’s a good game

Mhasikhotuo Mere: Great game ,I just wish there was more allies or hero, hope we get to see new allies n hero to use in the battlefield with more updates ,the difficulty in the game makes it challenging n fun at the same time, the unique ability of the characters makes it even more exciting,I will recommend playing this game to any tower defense lover out there .

Fenua Augustina: Cute characters, handles are great. Some levels are harder to pass, but the challenges are good fun. I’m not too bored replaying the same levels over & over again to power up. + An extra star for offline ⭐

Er Wee Liang: Good game I would say, but it takes time to accumulate coins, hero pieces, weapon pieces or anything. After recent update, the buy keys option is blocked as the plus sign is not available anymore.

么什: Nice + fun games -w- , but for endgear itself you must grind hard tho , PS : creating tree skills was really slow T.T