Coin Rush APK is a completely free game on Android phones. A fun intellectual puzzle game, where you control a coin rolling away at tremendous speed to reach your goal to reach the finish line safely. It is not easy because you have to overcome many obstacles along the way.

Crazy Labs is one of the oldest mobile game developers and has released loads of fun arcade games for both iOS and Android platforms. Run Sausage Run or Miraculous Ladybug & Cat Noir and many other titles have always been among the top downloaded and highly rated games on Google Play.

Coin Rush! for Android is the latest game of Crazy Labs, promising to bring a great gaming experience for all players like their “senior”. In the game, you control a coin and have the task of making it roll until it reaches the finish line in each level.

The road to the destination is not only zigzag, but also many dangerous obstacles. You use the swipe control to cleverly weave a coin through the obstacle and roll to the finish line. You can not control the speed of rolling or stopping the coin, you can only control it to the left and right to avoid obstacles. The coin stops when it hits any obstacle along the way.

The spinning barrier, the hammer smashing endlessly, the enemy’s coins and many other bizarre objects suddenly appeared out of nowhere. Make sure you stay calm and ready to deal with any obstacles that appear in front of you. Being surprised by things that appear suddenly will cause the coin to run in the wrong direction and fall to the abyss.

Like every other game, when you level up, you will face more terrible challenges. Obstructions only appear when the coin is about to roll closer, without “setting up soldiers” first. Each level has its own set of obstacles that you can not predict what is ahead of you in Coin Rush! Android.

At a certain stage, when you reach the end but are defeated by the last obstacle, you can revive by watching the promotional video. Coin Rush! for Android is an offline game, so you can play games wherever you are. A useful tip you can apply is to turn off Wi-Fi or connect to the network to enjoy a seamless, uninterrupted game experience by pop-ups. 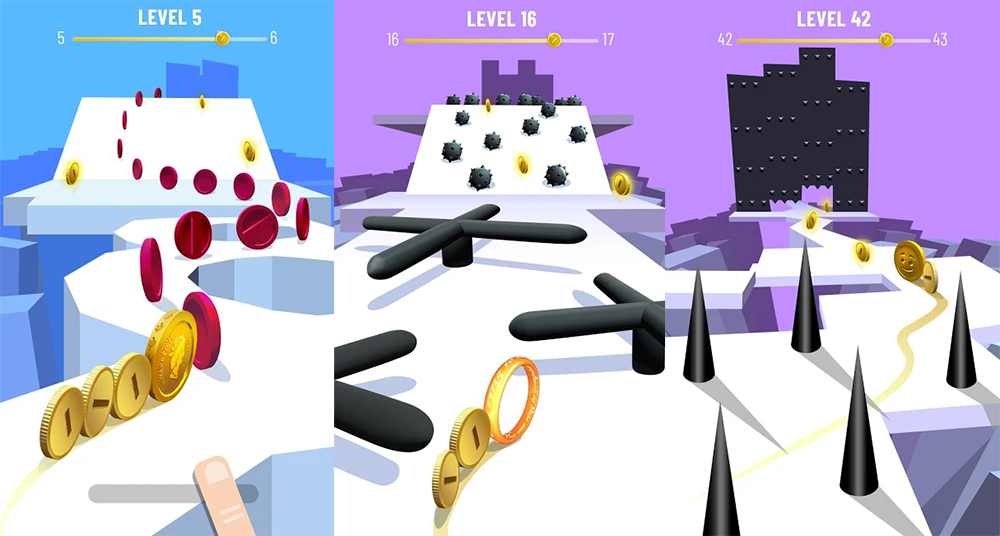 Control your coin to roll along the Coin Rush’s zigzag path and hit it in the target slot – make sure it has to go through the target slot before you can get past the level.
Avoid difficult obstacles on the road like deadly spikes, secret doors, revolving doors, …
Beware of steep ramp sections. It will make the coin rolling speed faster, you will need to control it and put it into the target slot professionally.
Earn points when driving coins down zigzag roads, passing levels and putting coins into the destination slot perfectly.

Annie Robinson: I only played coin rush for a day, but so far I still like it. It takes a few tries to pass the first few levels. Coin Rush gave me the opportunity to complete a complex level. What I am nearly unable to overcome by allowing me to watch videos. By watching the video, I was able to finish the game where I left off.

Kamran Beirami: Oh my god, when I first saw this game, I thought I was going to have a bad time. But no this game is very interesting and I like pennies! Thank you for creating this app! There is no problem with it.

WeatherMan Mia: I like this game because it is very difficult and challenging. And it’s a very fun game to play keeping me busy, I love it! I couldn’t pass level 32, that’s why I love it so much.

Aisha Noor Barbie: It has a lot of money, because it makes money quickly because when I open money. Like I have real money. It is fun and relaxing to play this game.

Parveen Akhtar: I love this game as it is for everyone. This game is a bit confusing but not very different. This game is best for teenagers and I highly recommend playing this game.

Free get Coin Rush! without registration, virus and with good speed!
Read the installation guide here: How to download, install an APK and fix related issues